This is a 3 part post, in which i cover:

COIN ACCEPTOR
I use this model by SparkFun: CH-923 sourced at Robot Italy.
The device is a robust independent coin acceptor with more than 95% coin recognition performance.
Here after the manual: 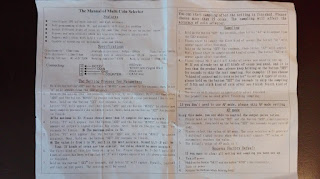 Is possible to use 1, 2 or 3 coin types. Each time an unrecognised coin is inserted the acceptor ejects it in the front.
If recognised, the coin drop from the bottom. 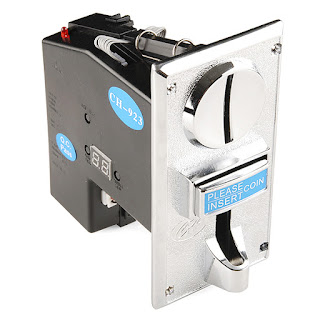 Voltage is +12Vdc sourced from the PC ATX connector (Yellow for 12V, Black for GND). Output is TTL compatible so you can use directly with arduino. You need only to interconnect GND from PC to GND to the Arduino part.

The output is programmable, so each time you insert a coin you can choose how many pulses the Acceptor are sent to the Arduino.

Because i use Euros coins, i've set 10 cents / pulse:
20 euro cents: 2 pulses
50 euro cents: 5 pulses
1 euro: 10 pulses
You can use a metal coin of your choice, and once programmed it will works with your coins.

On the Arduino Uno part i've connected the Grey wire to Pin 2 (INTERRUPT 1) acting as a switch using a 10k pulldown resistor. Each time a pulse is received an internal counter is incremented by 0.10 euro.
In the main loop each time the counter is > than 20 cents, is decremented by 20 cents and a keystroke is sent to PC.
The corresponding keystroke is then mapped on Mame as coin insert.

The sketch part is really simple:

The coin acceptor up to now was really reliable, so the arduino keyboard.
Customize it as you need.